Your District Council's Matlock Bath Illuminations burst into life on Saturday 9 September with yet another fabulous parade of decorated boats on the River Derwent and a fantastic fireworks finale.

The 120th Illuminations are on every Saturday and Sunday until 28 October, with discounted advance tickets available online - and accompanied under 16s go free! Book here.

The opening night marked a special milestone for compere Geoff Stevens MBE, who celebrated his 50th year presenting the festival. He arrived with wife Jacquie in a vintage car and was cheered onto the bandstand in Derwent Gardens by members of the Matlock Bath Boatbuilders' Association, who formed a guard of honour, oars and all.

It was the biggest first night in years. Almost 2,000 visitors poured into Derwent Gardens on the first Saturday – twice as many as last year’s opening night - to see the unique parade of decorated and illuminated boats take to the river for the first time in 2017.

It was a special year for the man known as the voice of Matlock Bath Illuminations, Geoff Stevens MBE, who is compering the event for a 50th consecutive year every weekend until 28 October.

Over the years more than two million visitors have heard Geoff - the man with the mike - tell the story of the history of the parade of illuminated and decorated boats.

Geoff and his wife Jacquie, who has assisted him down the years, arrived at the Derwent Gardens in style in a vintage open-topped car, and were treated to a guard of honour – oars and all – by members of the Matlock Bath Boat Builders’ Association.

On the bandstand Geoff was greeted by the Chairman of the District of the Derbyshire Dales Councillor Steve Flitter and his wife Ann and presented with a letter of congratulation from Her Majesty the Queen, a photo montage and a video of his golden memories.

Thanking everyone, Geoff told the crowd: “It’s an absolute privilege to do this job and I keep coming back because you, the people, keep coming back. It’s a particular thrill to be able to introduce in my 50th year one of the best boat parades ever.”

The lights switch-on was performed by Councillor and Mrs Flitter and two of their grandchildren, Zach and Isabel.

Saturday’s opening night also included a thrilling fire and glow show and a fireworks finale – there are fireworks every Saturday during the 2017 season, sponsored by the Heights of Abraham attraction in Matlock Bath.

The unique parade of illuminated boats happens twice on Saturdays at 7.45pm and 9.15pm and at around 7.30pm on Sundays.

This year adults pay £5.50 on Saturdays and £4.50 on Sundays if they buy online in advance - that's 50p cheaper than last year. Accompanied under 16s continue to be free, with concessions available for students and OAPs.

People who buy on the night will pay £7.50 on Saturdays and £6.50 on Sundays - £2 more expensive than the online prices. Book here.

Online bookers are fast-tracked into the Derwent Gardens - and the online incentive prices also apply to visitors who take the train to Matlock Bath during this year's season.

Hourly trains to Matlock Bath from Derby and Nottingham operate Monday to Saturday and every two hours on Sundays - for more details go to www.eastmidlandstrains.co.uk/derwentvalleyline 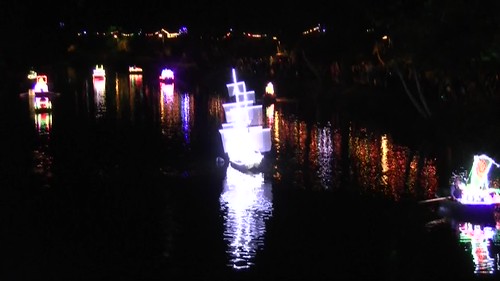